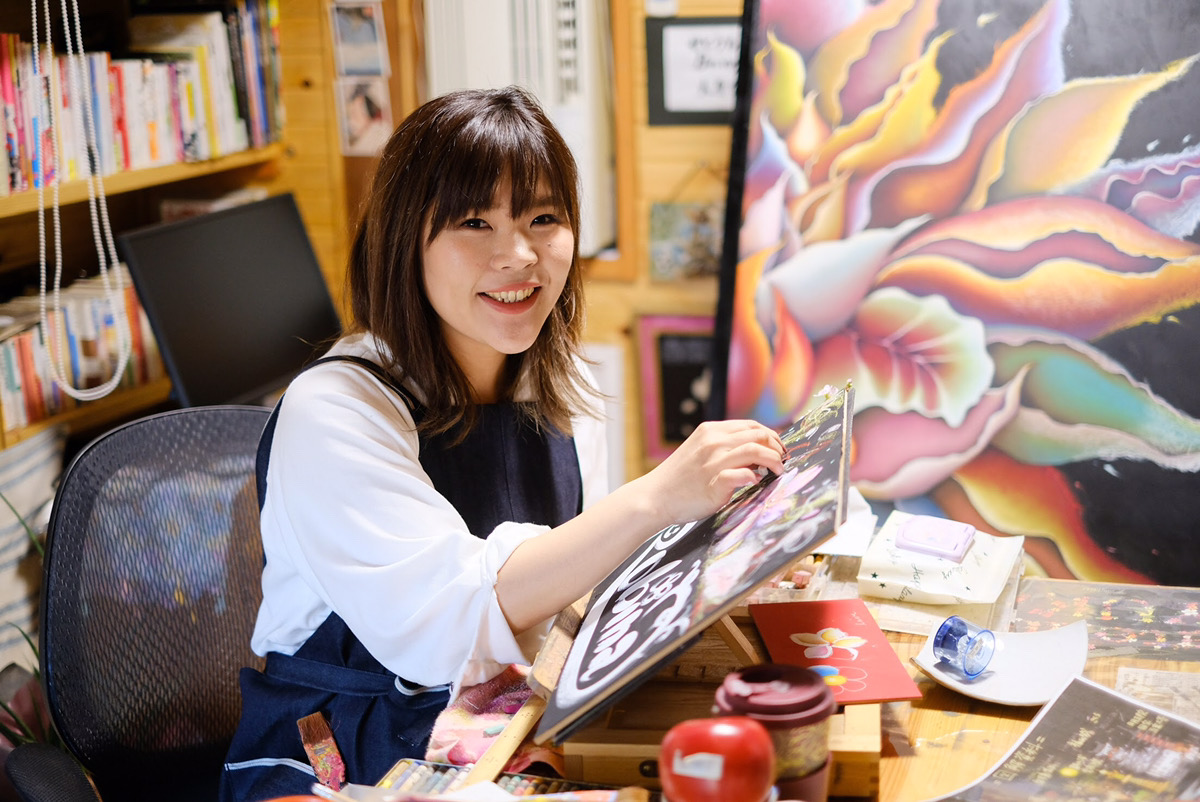 OHARA, Yuka (1988- ) was born and raised on an island of Onomichi City in Western Japan, surrounded by mountains, the sea, and a rich natural environment. She has a strong motivation of innovation and creativity in drawing and painting. She was attracted by Chalk Art drawings in oil pastels in Australia while she was there for a language course. She returned to Japan, but again she went back to Australia to study Chalk Art. In February 2011, she graduated from a Professional Course in Chalk Art, and returned to Japan. She has accepted orders, produced works of art on order,displayed her works at exhibitions and held her own personal exhibitions. About the time of her professional course in Australia, she got to know the real pleasure of creating art works for the first time. She left the company she had worked

for and decided to devote herself to her job as a freelance chalk artist.Ms. Oohara's desire for creative art became greater and greater, and she started to exhibit her art works not only in

Hiroshima, Tokyo, Yokohama and in other areas of Japan, but also in Los Angeles, Italy (Milan,Bologna) and abroad, and her chalk art works have attracted more and more fans. While she was at work on her art creation, she discovered she was good at making pictures of plants to express herself visually. (Title of Art Work: Inner Fire) Her way and style of expression, composition and coloring has been well received, rated highly, and accepted for the Nika Art Exhibition.(Nikakai: "Nika Association", an association of artists, and an art organization which has produced quite a number of artists in Japan) Her art works are rich in brilliant colors with bold compositions and have attracted people to view them and imagine various kinds of hidden stories. It is just like Yuka to produce such works to express an imaginary,

unknown, implausible world.In 2016, Oohara was recognized as a certified chalk art lecturer. She opened her own chalk art classroom "Robina" in 2017, and now she has been running it happily, thinking of her students as her best friends. In 2018 at the strict judging contest of the 103rd Nika Exhibition, she received the Nika Newcomer Encouragement Prize for the first time. In the following year, the work was exhibited in the winners' exhibition at the Imperial Hotel Imperial Tower Gallery. In recognition of her talent, she was certified as a member of Onomichi Art Association(Onomichi Bijutsu Kyokai)in 2019. In the same year, she was also certified as a Tourism Ambassador of Onomichi, where she was born. She wanted

to convey some aspects of "Onomichi" through art, and drew the sightseeing spots in Onomichi together with characters written in "Kanji" as "Onomichi". It has been well and favorably received by tourists from outside the prefecture as well as from this area. She drew a chalk and window art work on the glass front doors of Kurihara Kita Elementary School,

Onomichi City, together with her private classroom students and the students of this school under the theme of "the Happiest School in Japan". In addition, she donated "Natural" (displayed at the Nika Spring Exhibition, Tokyo Metropolitan Art Museum), which appealed to the sea environment, to the elementary school and used it for environmental education. Impressed by the joyful voices of the students, she foresaw that upcoming artists might be

among them.Oohara is currently expanding her range of activities, including making murals (wall paintings) regardless of chalk art or window art, and giving encouragement to students at her lectures.